André Stroet studied Physiotherapie at the "Twentse Akademie voor Fysiotherapie" (now known as SAXION High School in Enschede NL). With the "staatliche Anerkennung" he worked for almost ten years at his own Praxis in Greven (NRW). Afterwards he studied Sports Physiotherapy at the SWSF and did the upgrade at the Utrecht High School.

He was not only interested in the curative treatment but also in the prevention of sports related healthproblems.

His practical knowledge has helped him in the physical healthcare of tennis (Stützpunkt Greven) and football. His case study was: "Returning to football after a Herniated discus operation, is that possible?"

Around 10 years ago, he became interested in the shockwavetherapy. He attended the certification courses at ATRAD 2010 and 2012, the ISMST 2013 and 2014 and recently at the EMS Academy 2013 and 2014, and has since accumulated nearly ten years practical experience in this speciality.. 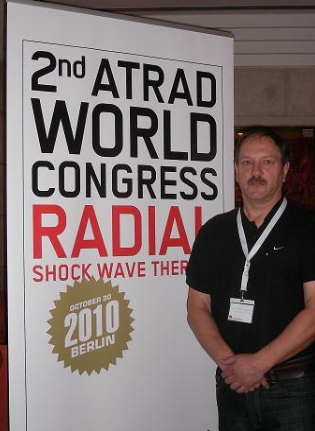 His expertise in the Shockwave Therapy has been used to  train new students from the EMS Academy in the Netherlands. Many colleagues have already made used of his practical knowledge  in the Shockwave.

In 2014 he started his Master Musculoskeletal Study (Msc) at the SOMT in Amersfoort NL. His case-report shows the effects of a shockwave treatment on a juvienile footballer suffering from the Osgood Schlatter disease.

(Special thanks to Donna Webb)